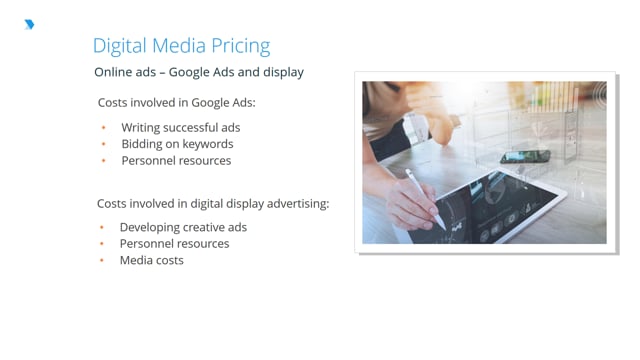 This is also known as CPM, which is basically the cost to show one ad to 1000 viewers. So this is a pure measure of reach. If you have a display ad is that reaching 1000 people? That’s a core measure of reach. What it doesn’t tell you, however, is whether those people have looked at that, interacted with that, thought anything about that; it simply is a measure of pure reach.

This is the cost to show the ad to one viewer. Each time of an ad is clicked, money will be paid. So a banner ad, for example, that requires a click through that will be the point at which that cost is generated.

The positive of that is that it shows a degree of direct engagement because somebody has clicked on it. In other words, somebody has wanted to find out more about it. But again, the challenge is on what basis have they clicked on the ad? You can get accidental clicks; you can get bots in space that are clicking. So it’s not a fool-proof measure, but it does show a greater level of engagement of a single viewer clicking on an ad.

So think about cost per thousand, cost per click, and cost to lead as people becoming progressively more interested in your proposition, in your service and more likely therefore potentially to want to ultimately buy it. But they are different methods by which media budgets can be allocated.

You can think about media budgeting in terms of how many people you have acquired. How many new customers? How many users have I acquired? And in that instance, the advertiser only pays when an advert actually delivers an acquisition. So that’s all the way through the chain to somebody who’s actually bought.

So clearly what you’ll see is the costs going up from basic reach all the way through to acquisition. And it’s important as an organization to define what’s the most important measure for you. You may have a number of these measures that you think are relevant. Ultimately, what’s the key measure that’s important for you, and therefore how do you budget for that? You’ll clearly pay far more for cost per acquisition or even cost per lead than you’ll pay for cost per thousand. Because you’re getting more interested people who are more potentially become customers of your product or service.

Tenancy, in a way, is almost traditional media on digital media. It's a pricing model that’s based on having a defined position on a page for an agreed period of time. So, for example, a Yahoo! home page takeover would be a classic example. So you’re paying to have a particularly prominent position for your message in a particular place, for a particular period of time. It’s kind of offline media but within the digital world. And that can be very relevant, particularly if it’s a very high-profile event, particularly if it’s something where you can get significant reach, for example, a home page takeover. Tenancy can also be a way that you can think about allocating budget.

The budget plan is always going to be affected by limitations and they can be obviously inventory limitations. If somebody else is doing a Yahoo! home page takeover, you can’t do one, for example.

There are also price constraints. Cost per click can dramatically increase in terms of cost if you’re in a particularly competitive sector. If you’re trying to do cost per click on low-cost holidays running up to the holiday season, then you’re going to find the cost is going to be significantly more expensive than it is perhaps other times of the year or in other sectors.

When you consider media budgets, particularly in terms of online spend, it’s important to recognize what some of the core elements of those costs are.

With Google AdWords, there are a number of costs.

Another important factor to bear in mind here is that actually you’ve got different audiences in different channels. There are differences in terms of the penetration of different social media channels among different demographics. It’s really important kind of first principles of marketing let alone digital marketing. You must work out where your target audience are. Where are they? Where are they spending their time? What are they doing with the time the best spending there? Because that enables you to think about the relevance of the channel according to not only “Is my demographic actually there and in what numbers?” but also “What is my demographic using that channel for?”

The way that people are using things like Snapchat, Instagram, Tumblr, Twitter and Facebook are quite different. They may all go under the 'social' umbrella but they’re not all being used for the same thing. And the role, therefore, that you may want to have in social media in this instance may be very different depending on those channels. There may be no role for you in some of those channels, it’s much tougher in some of those channels to actually engage as a brand, as a product, as a service, and place.

On places like Facebook, it can become increasingly natural. On places like Twitter, again, but interestingly on other areas it can be much more challenging. So think about the relevance of your message, the presence of your audience when thinking about which channel you actually want to focus on. True in every channel, but particularly true in social.

What kind of cost do you need to think about when you’re developing a social media campaign?

But if you have a social media team who are responding to inbound comments from customers, then that can significantly increase the level of personal resources that you need. People’s expectation of a response on social media if they’ve asked a question of a company is generally less than an hour. You can think about the level of implication that could have in terms of personnel resources. But even if you’re only using it for outbound, even if you’re not responding or having a conversation with somebody clearly the level and volume of what you’re generating is going to have personnel implications.

Having people working on social media is an extremely important part of any company’s strategy, in terms of the image that it’s projecting to its target customers and indeed to the outside world in more general. So there’s a real need to ensure that people have the right level of training not only to communicate the brand values and the company values, but to be able to strike that right balance, which can be a difficult balance to strike between having the right tonality in social media. Perhaps being a little bit reverent, perhaps being a little bit kind of spontaneous without stepping over the line of things that will potentially cause issues for the brand or issues for the company. And there are many examples, that we’ve seen in the past where people have stepped over that line because of lack of training. So don’t forget to invest in the training to ensure that people are responding appropriately and outputting appropriately on social media.

Just because it’s social media and not display advertising doesn’t mean that you’re not going to be developing things that have significant components of graphic design in them. Obviously, video production is a key element for social media now. And the demands of social media are such that the variety of what you are producing and the frequency with which you’re changing it are growing significantly versus many other channels. So the volume of that, and particularly maintaining that at high quality, can be a key challenge.

You need to plan for services like graphic design and video production that you may well not have in-house. And a lot of people, therefore, are buying in consultancy to help them with social media. Either from a strategy point of view, because social media is a multi-layered and complex space, or consultancy from a creative point of view, or design point of view in order to try and optimize what they’re delivering through that channel. And when you start grossing some of these numbers up, they can get pretty big. Once you start working out how many posts you want to put out, how many people you need to put them out, and how long it takes to put them out, you can quickly we end up at some fairly large numbers in terms of a cost for social media management and social media production.

The following costs apply when advertising on Facebook and LinkedIn.

There are three main ways in which you can promote your goods and services on Twitter:

Ready to learn more about Digital Marketing?
Sign up for a FREE trial, and get access to more great content to help you level up your digital marketing career.