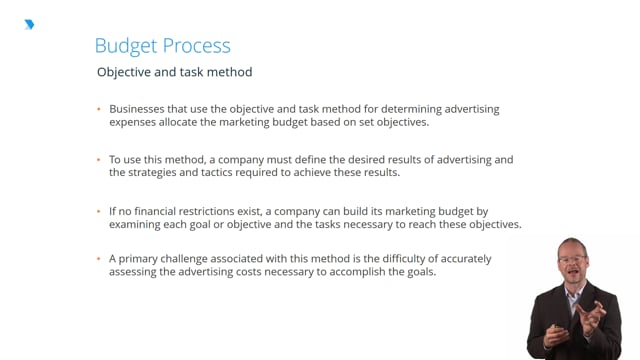 Let’s talk about the amount of budget that tends to be set, and different ways in which you can go about in deciding the amount of budget that needs to be set. There are many different methods that are used, and many different approaches that are used in different industries. No one is particularly right or wrong, but it’s important to have an appreciation of the different approaches that tend to be used, and perhaps what the pros and cons of those different methods are, so that you can think about what maybe most appropriate about the situation that you are in.

The first one is a classic one, which is the percentage of sales. This involves setting a marketing budget based on a proportion of either the previous year’s actual sales, or the coming year’s forecasted sales. So it’s a classic rule of thumb level of budgeting.

Most people would recommend 2–10% of gross sales, but actually this can vary dramatically depending upon the industry you are in. So for example, FMCG organizations, you can often see the marketing percentage of being as high as 30%. Those are industries like Procter & Gamble for example, or Unilever, FMCG organizations where you will tend to find that share of mind is a really important component of their business plan, where reaching out to very large numbers of people is a really important component of their business plan. And they’ve spent billions building brands, building image around brands, building values around brands, and it’s incredibly important to maintain that in what is fiercely a competitive market. So it’s become traditionally for anything up to 30% of sales to be spent in some of these FMCG or food beverage and entertainment types of businesses.

In publishing companies, it can be even higher. Up to 50% of the budget can be spent on marketing. And conversely, if you got to B2B and service-oriented companies, very often it’s much lower. The costs structures of those businesses can tend to be much higher, the fixed costs are much higher, particularly things like service oriented companies. In B2B organizations, there very often isn’t a tradition of marketing. In some B2B organizations, the marketing budget is very small indeed, because traditionally, not a lot has been done in that area. It’s traditionally being spent particularly on sales, for example, sales teams, sales organizations, direct relationships; and marketing is only beginning to make inroads into that area. And so, sometimes they can find themselves with very limited parts of the budget.

So often this is historically based, often it’s culturally based but it can still be a very traditional way of setting budgets based on percentage of sales. It’s good in the sense that it can provide a degree of forward planning, and a degree of stability, and you can understand exactly what you’re going to get. But it doesn’t necessarily enable you to transform an organization. It doesn’t necessarily enable you to do something that’s fundamentally different to what’s been done before.

It’s also really important to ensure that if you’re simply spending the same percentage of sales that you were spending last year, particularly if your sales aren’t changing, then you are not necessarily going to expect radically different results. You certainly not going to expect more budget and it’s going to put more squeeze on the effectiveness of what your budget has to deliver.

It’s also a tricky place to be if you end up in a scenario where sales are declining. So ultimately, you are continually cutting back on the amounts of money that is being spent on marketing because sales are declining, and they may be declining for reasons that have nothing to do with the effectiveness of marketing.

So you’re tied to a metric, effectively, that’s to some extent not always within the marketing organization. But still, it’s a very popularly used one.

How much can we afford to spend on marketing? Now many companies employ this for determining the promotional budget that they’ve got but, ultimately, it’s a fairly subjective assessment. At what point do you decide what’s affordable?

There are many organizations that literally will allocate every other area of costs, then they’ll have a target profit margin they want to achieve, and then the balance is basically what’s available to spend on marketing. It’s seen as being the ultimately flexible expenditure item compared to many other areas, to fixed costs or materials costs, or so forth.

The next one is probably the best one, if you can get to it. This is thee objective and task method, or sometimes called the zero-based budgeting. You define your own budget based on the objectives that you want to achieve. So effectively, it would say: “If you want to achieve a certain set of objectives, how much budget do you need in order to achieve that?”

It’s a great place for a marketer to start because it’s genuinely asking you to tie objectives next to budget. So you create a really strong link between ‘if you want this outcome, this is the amount of money you need to spend to get this outcome’. It sounds very logical and very simple! And if you can set your budget in that way, it’s by far the most controllable, and the most defendable, budget from a marketing point of view.

It’s not always the way marketers have to work, because clearly you are going to be often constrained by many other factors in the budget setting process. But at least if you can create that clear linkage between this amount of money being spent delivering this result. If that budget is affected over the year, then you can recognize the impact that’s likely to have on your targets, and either reallocate the money in an attempt to do that. Or you can flag up to management that perhaps this target may not be achievable because you recognize it requires this amount of spend to be able to deliver it.

So it’s by no means a foolproof method, but it is at least one that enables you to focus more on the link between activity and outcome than simply starting with a pot of money, and having to deliver series of outcomes from that pot money.

Because you are operating in a competitive environment, you try to be more effective than your competitors in winning the hearts and minds of your customers. This method involves determining what your competition is spending on marketing and advertising, and setting your budget a little bit higher than that.

This can often be used in sectors where there’s a small number of large competitors, and they spend a lot of time looking at each other, monitoring each other. So, for example, consider Procter Gamble versus Unilever and FMCG, or some of the big insurance companies, where perhaps there are relatively small number of big players in the market. And what one player does can have a significant impact on another player.

So you're focusing on your competitors and understanding what they’re spending. You say, “I might set my budget at least in line with that or maybe a little bit more than that. My goal is to try to have better marketing effectiveness, and to spend my money smarter than they spend their money. And what that will then enable me to do is to deliver better results than them.”

It’s also an effective benchmark for a wider board to be able to analyze. So you don't have an abstract conversation about whether five million or ten million dollars is the right amount of money to spend on marketing. If that’s what your competitors are spending, it becomes readily defensible because everybody recognizes that you need to be able to compete effectively in a market. If you are spending one-tenth of what your competitor is spending, then unless you have genuinely genius marketing tools and ideas, it’s unlikely that you’re going to be able to outshout them, or outreach them, or grow share against them.

There are a number of challenges with this method.

The competitive parity method is very useful for benchmarking. It’s very useful if you want to have a market share that is similar, or if you want to win share from a particular competitor. But be aware that it’s not necessarily very accurate. And beware of being a follower rather than a leader. Your primary focus should be, what do you want to achieve as an organization? What outcomes do you want? What amount of money do you need to spend in order to achieve those outcomes?

So it’s important to think about the different things methods of budgeting because you will come across them in many different organizations, but there are pros and cons associated with each. 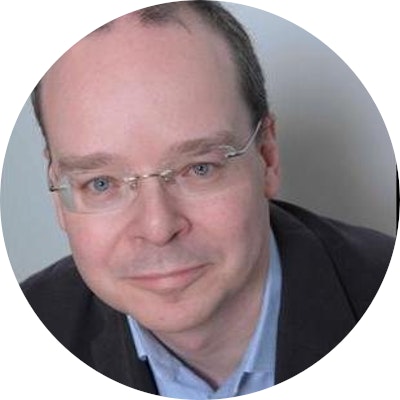