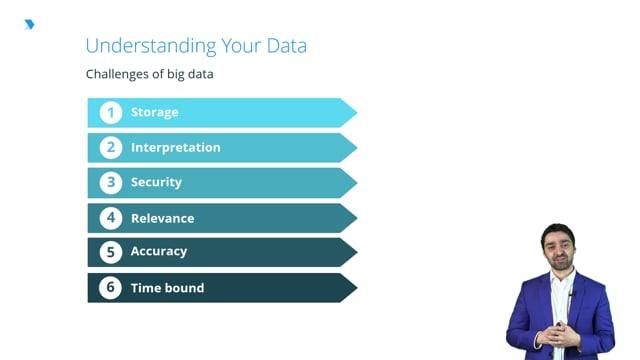 Data and Analytics View All →

What do we mean by data in its core essence? So the definition is, “Data is information in raw or unorganized form such as alphabets, numbers, symbols that refer to, or represent conditions, ideas, or objects.”

Now, ultimately, thinking about it across the spectrum of what data means is very, very valuable. Think about this across your core dimensions of qualitative data, as well as quantitative data.

So qualitative data is effectively a depth of insights that you get which are more qualitative in nature. They are not necessarily numerical, but they are core insights that are say captured through methodologies like interviews, for example.

On the other hand, you’d have more codified types of data in the form of quantitative analysis. Now thinking about quantitative analysis could be anything from thinking about your management information that you have with the core of your organization. Think about sales figures is a great one, or number of complaints is another interesting one to look at. You can also look at data in terms of a customer journey flow.

So think about the bottlenecks that exist within your customer journey and understand how many people, say, “drop off” when thinking about a customer acquisition journey at different stages. Codifying the bottlenecks within a journey can provide extremely useful insights for you and your organization about where exactly you need to focus your efforts to make changes and ultimately, increase the bottom line.

Now, thinking about the world of big data, in essence, there’s a great quote out there that says, “In the last two years we’ve created more data than we ever have in times gone by.” The advent of big data has become one of the fundamental changes to the way that we view the world, and also organizations start to collect and actually make decisions from it.

But let’s think about what big data is to begin with. Well, ultimately it’s a coming together of multiple datasets both from your internal sources within the organization, as well as matching those up with external sources. So overlaying the external information and insights become very valuable at adding more color to your current operation or current way you do things.

There was a great TED talk on this which talks about what was America’s favorite pie? Ultimately, people always assumed that it’s apple, and yet when you start to dig down into the sales figures, particularly during the advent of smaller, bite-sized pies in the American marketplace, we’ve come to the realization that actually apple was the biggest compromise for American families; and their favorite pie was, in fact, another pie, whilst apple came in at number two.

So you can just see narrowing and meshing across different sets of data and the depth of data that you go into becomes interesting to understand different insights that you may have.

Let’s think about some of the core challenges that exist when thinking about big data.

Now, let’s think about some of the key misconceptions that you have when thinking about your data.

Why is that? It comes back to statistics. If we have a larger dataset, it means we can get more meaningful results. Let’s go back and think about the core of the definition of data. Sometimes having a massive pool of data sets actually can be more complex and confusing than, say, getting a few key qualitative insights that you can then lean on around to make up key decision making. The common phrase around analysis paralysis is normal or true when it comes to data analysis here. So think about that; and you don’t necessarily need to focus on massive datasets, although in most cases it needs to be robust enough that you’re gleaning generalized results out of, and not basically skewing the results for one specific population.

That is a longitudinal type of aspect to data. Now we talked about the need for accuracy, and relevance, and time boundless; and on the flip side, you talk about historical data. And in reality, historical data may be less valuable to us. Think about some of the key macro trends that happened over the last year. Who could have predicted these things? So, in reality, relying on data that are years past may not be the best predictor of the way things are going to happen in the future. We should be quite cognizant of that as we move forward with this.

Correlation is effectively when one thing happens, another thing tends to happen. So the factors are correlated together. Now the problem with that is you don’t quite know which way around it happened; whether you’ve made the change and then the customers have responded, or something happened within the customer psyche which then influenced that change. So you don’t know the area of causation. So you must be very careful when analyzing data not to make assumptions about causation, although correlation is the first step. And then you need to work out what the causation effect is. So you need to be conscious of that dynamic.

Context is another massive misconception that we tend to find within data. And essentially it’s trying to look at data through too much of a narrow lens. So context is absolutely critical and context is key, as the slide says, to make sure you’ve got the best picture or a holistic picture around what the data is saying to you.

Ultimately when you have large sets of data, people try and glean to what is the average of what that data is telling you. The problem with average or median is you don’t truly understand what’s happening at the pool or the pools, so you might miss out on vital insights or you might miss out on what the data is really telling you if you constantly go just back to the average. The best thing to do to avoid that is to unpick the data, create micro-segments within your data, and analyze key variables in isolation, and also think about standard deviation. Now standard deviation is effectively looking at the average point and then determining how far are the extremes in terms of the deviation from the average. The further or the highest standard deviation, you know your data is far more skewed and you then have to start to think about something beyond the average point. If the standard deviation is very, very narrow then in reality, the average becomes more reliable.

So you need to think about a variety of different things, and these are just a few key watch out to make sure that you don’t fall into the key issue around data traps and misconceptions when analyzing you’re analyzing your data.

Consider this question: What does the average US citizen spend on? Effectively, if you take the averages, the average won’t reflect the full range of the data in effect. It also may be skewed by a group of anomalies. If you have someone who is spending an enormous amount of money in one area, the average will automatically be skewed to that particular area. You will then start to think that the average is actually much higher or much more skewed in one area than it actually is for the generalizable population. So you need to think about that when considering this. And standard deviation, as I mentioned before, is a great way to kind of overcome some of those core biases that you effectively see within this data. 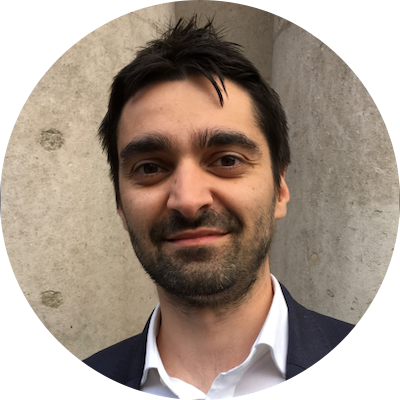 Ready to learn more about Data and Analytics?
Sign up for a FREE trial, and get access to more great content to help you level up your digital marketing career.