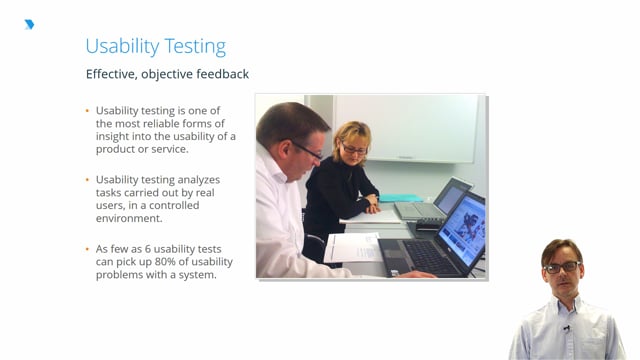 We now come to testing and validation, a central concept in making good design decisions and bringing a design ever closer to the goals that were established for it at the outset. Testing and validation can offer input at any point during the design process, and as we mentioned earlier, testing early and often is the best approach.

Usability testing is one activity at the very heart of good user experience. It is in fact the most effective tool in evaluating an interface against the measures that were set for it. Usability is objective, and crucially it involves real users from outside the project in order to achieve that objectivity.

Usability testing can be conducted in a moderated capacity, on-site, or remotely online.

A usability test can offer both qualitative and quantitative data, for example:

The conclusions from the test can point the way towards alterations or changes required to improve performance in facilitating tasks and goals.

Moderated testing is a form of usability tests where a moderator sits with a participant and asks them to perform certain tasks, taking the opportunity to make inquiries about the user’s choices or expectations.

Moderated testing is more time-intensive, in that it requires a very particular setup and can involve the recruitment of specific relevant participants to take part in the tests, something which can be a job in itself.

Unmoderated testing is an alternative form where the participant is remotely asked to perform certain tasks in isolation, thinking out loud as they proceed while video footage of their screen activity is recorded for later analysis.

The benefits of unmoderated testing include that it is efficient and requires less budget. Potential drawbacks include that it places limitations on the degree to which a tester can communicate their intent or actions. In short, you take what you get from the test with no option to intervene or make inquiries of the user as they conduct the test.

There are other forms of testing that allow for very specific tests on designed to be undertaken.

During a five-second test, an interface is shown to a participant for five seconds, after which that person is asked a number of questions about what they saw.

Five-second tests can deliver top-level findings about an interface including its most prominent visual elements, the user’s initial assessment of a product or company proposition, or the main navigation options that the user perceived to be there. W

While these may seem like very minor inquiries, the significance of the five-second test shouldn’t be ignored. Users make very quick initial decisions about whether or not to engage with a website or service.

Consider this quote from Entrepreneur Magazine in 2012:

“It takes less than two-tenths of a second for an online visitor to form a first opinion of your brand once they’ve perused your company’s website.”

The old adage, “You don’t get a second chance to make a first impression,” is not too far from the truth when applied to web design.

But remember, these decisions are not based on the amount of lavish visual design applied to the website or how big the logo is. A user’s assessment will be much more nuanced than that, whether they realize it or not. Five-second test can begin to gather the type of data that can reveal issues with that initial assessment.

Click testing can be carried out on low fidelity or high fidelity prototypes, depending on the nature of the task. It might be used to test navigation elements, but similarly it can be used to discover if users can locate content on other parts of a webpage, or if specific terminology and labeling are effective in communicating a particular concept. Click testing is one of the ways in which designers can decide on the location of individual visual elements within a design.

Preference testing is as it describes. It is a record of the preference of a test participant against two versions of a design. The two versions are presented to the participant, and they select the one that resonates most with them.

A/B testing involves two variants of a web page or interface element being displayed to different users concurrently. This is similar to preference testing only in it that involves two versions of a design.

The variants will be presented to users without their knowledge that another version is also available. Studying the analytics on the relative performance of each option would provide insight on which is more effective in furthering the goals for the design. A/B testing might offer insight into, for instance, the placement of a call-to-action button or the layout of particular content, such as a product information page.

Another form of this test is known as multivariate testing, where multiple variations of a design are used with the goal of finding which combination of designs will be most effective overall.

For example, a color change of a button might be tested and found to have had a profound effect on user behavior. While differences of this magnitude may not be so common, it is not unusual for A/B tests to yield a clear and unambiguous answer to the debate around elements such as this.

Eye tracking is a highly-sophisticated technique which records and measures the movement of a user’s gaze across a screen. The applications for this in UX design are clear. Eye tracking can provide insights on gaze placement, where the user is looking, and the length of gaze, how long they look at those items for.

Eye tracking results in the form of a heat map, as shown here, can reveal overlooked elements. They can also shed light on how users scan and absorb information. Eye tracking might be used to offer insight on the layout of a design right through to the placement of individual interface elements. 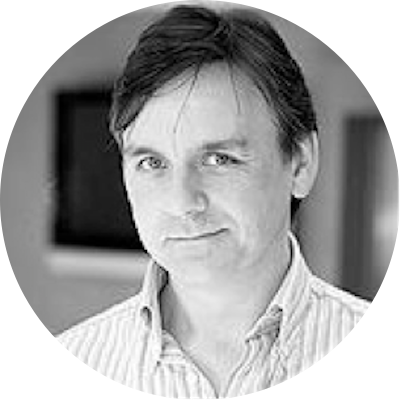