Managing and leading are similar, aren’t they? After all, they have the same purpose, right? Well, in real terms they are actually different roles in the same play. Metaphorically, a leader is like an explorer who leads a fleet of ships to discover new lands. And managers are the various ships’ captains who follow the explorer’s directions and get the ships safely to their destinations.

So how does this apply to organizations?

First of all, a manager is an executive who gets things done.

Managers are concerned with making things work through planning, budgeting, organizing, staffing, controlling, and problem solving. They focus on organizing information, people, and resources. And they make sure the work gets done and that products and services get out the door on time.

Although we may use extensively the term ‘team leader’, such leaders are really managers.  They are involved in all the managerial tasks of organizing other people to execute the work. In fact, they often do much of this work as individual contributors themselves. This role, and even those of most senior executives, is really another level of managing.

The act of managing is attractive to many, because it allows for measurement and control. These certainties are difficult for managers to give up in exchange for the uncertainties and greater risks inherent in leadership.

So what is a leader then? A leader is someone who inspires others and guides people to get things done.

Leadership is about getting up front and driving the bus. It is focused on making things happen, but not on making them work. (That’s the manager’s job!)

Leaders scan the environment, see possibilities, and create a vision of the future. And from this they create a strategy for achieving it. They communicate that strategy to other people, and inspire them to buy-in and make it happen. Leaders either create the structures or systems that managers manage, or they mold existing systems, or organizations, into something new that better fits the demands of a changing environment.

Leadership becomes more essential in times of rapid change where new thinking and direction are needed.

By starting new enterprises, inventing new concepts, and driving new and innovative projects, leaders explore the territory of the unknown. This is not what managers do. So switching roles from manager to leader demands letting go of the certainties of managing and embracing the uncertainties of creating a future.

It is not unusual for business “leaders” with a managerial mindset to find it difficult to change what they have been doing, because they know what works. In other words, they are unable to flip into a leadership mindset and they continue to relate to people, work, and challenges as a manger would. But as Marshall Goldsmith, the famous coaching thought leader, says to executives, “What got you here won’t get you there!”

Leading requires a different set of skills to those of managing. It involves committing to further personal development and to learning those skills. This is both a challenge and a prime objective for anyone aspiring to become a leader.

His first action was to meet with all of his staff and establish a relationship with them all as their new boss. He knew how to work with people in a highly creative environment. The staff loved him. He managed the division effectively and quickly introduced many brainstorming initiatives that enhanced the creativity of the whole team. Six months later, other directors and heads of divisions in the company had still not met him. It appeared not to occur to him to look at the entire organization and its business as a whole, and to focus on a vision for development. He was an effective and competent manager, but he lacked any understanding of being a leader. A year later, he left the job. 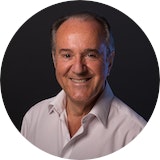 Being able to think strategically, and to see the bigger picture, are attributes that every great leader should possess. With strategic thinking, you can create the future for yourself and your employees. It helps you to identify opportunities for change, and take advantage of them. This, in turn, increases market share and profitability, and makes your business more durable.

In this module, you will learn how to become a strategic thinker. You will discover the characteristics of strategic thinking, and its many benefits. You will also be introduced to a method called Future-basing® that you can use to build a vision for the future in your own organization.

You will also learn how to develop a leadership mindset, which entails being able to visualize how things should be, communicating that vision, and taking a wider, more panoramic view. This should help you transition from acting like a manager to thinking like a leader – which is another key take-away from this module.