The Continuing Evolution of Black Friday 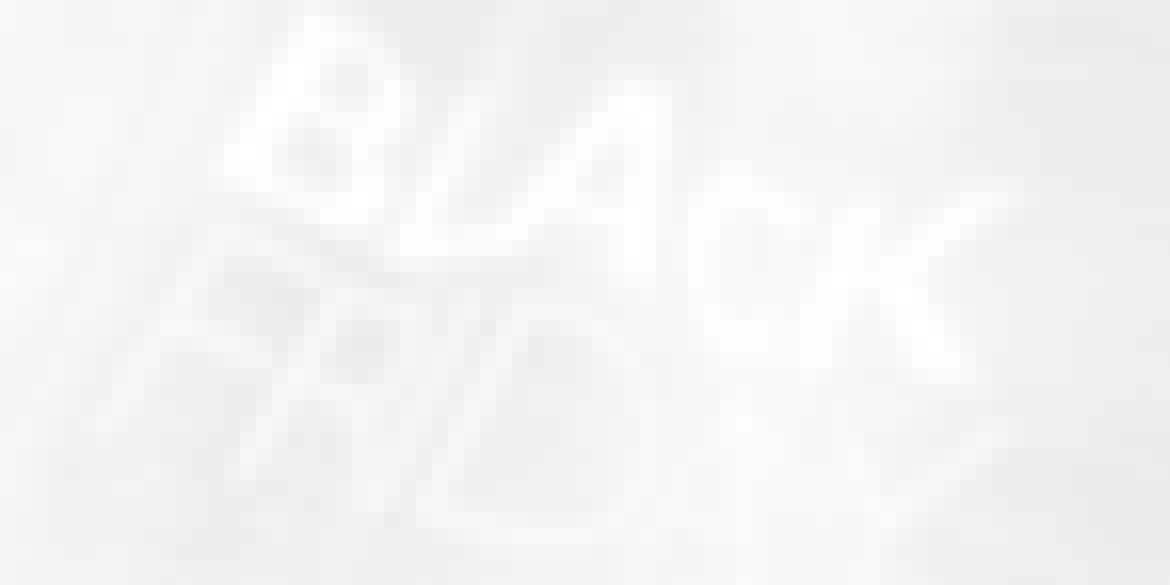 From the opening of Macy’s Thanksgiving parade to the New Year’s sales, the final weeks of the year are a shopper's delight. This period of retail is at the core of the industry's so-called Golden Quarter; or, as it’s increasingly known, ‘ Christmas Creep’.

Black Friday and Cyber Monday have started to merge into a single weekend of discount deals, and coming soon after China’s mammoth Single’s Day shop-fest, this period has quickly become as much a tradition for millions of people as turkey and Santa Claus. Online sales are overtaking footfall sales and the buying bonanza is spreading further around the world.

In 2018, the eCommerce colossus, Amazon, broke its sales records for Black Friday and Cyber Monday. Moreover, Cyber Monday sales across retailers hit an estimated $7.9 billion in the same year, making it the biggest shopping day to date.

In this article we'll take a look at the evolution of Black Friday (and the other shopping days around it), watch how it’s spreading around the world, and consider how it’s evolving from shopping mall frenzy to online conscious-consumer.

The Origins of Black Friday

The name Black Friday originated in the 1950s in Philadelphia, when masses of people would storm the city the day after Thanksgiving and fit in some shopping to coincide with the big Army-Navy football game. The hard-working police force of that city began to refer to the day as Black Friday thanks to the traffic, shoplifting and general mayhem (some of which might call to mind the more unpleasant shopping mall incidents closer to our time).

The term Black Friday was first used in print in the late 1960s but it was only in the 1980s that US retailers saw its potential. When they brought the name back in, it was in deliberate reference to “being in the black” after a year of poor profits (or "in the red"). 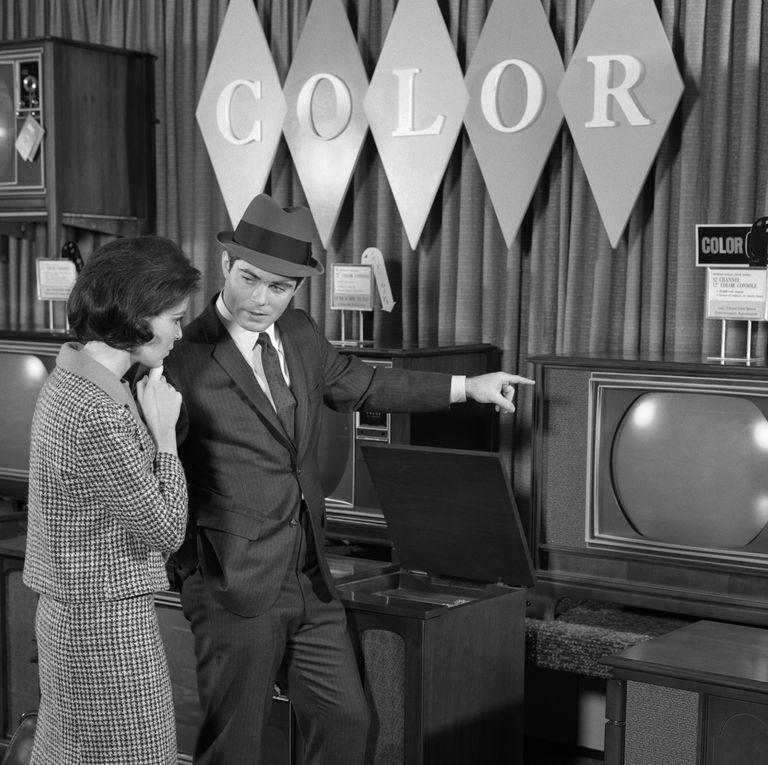 As online shopping became more commonplace, bricks-and-mortar stores started to see yet more potential. The online efforts and expected profits of the three largest US retailers - Amazon, Walmart and Target - show just how Black Friday and Cyber Monday have merged into one single weekend of shopping, with lines blurring between in-store and online retailing. Cyber Monday took off in 2005 when shop.org’s founder noticed a huge 77% spike in online sales after Black Friday.

Shoppers have taken seamlessy to the online environment, and for good reason. Not only do they benefit from pre-Christmas deals but they also get the convenience of going no further than their doorstep to pick up a package, avoiding cold weather and driving to stores. Amazon’s 2019 move to speed up delivery times even further is an indication of how this convenience has become a given: this initiative alone is expected to cost them $1.5 billion in the last quarter of this year.

Filling up for the Weekend

The entire weekend after Thanksgiving now has a number of spinoffs marked on many retail calendars, though Sunday has mostly escaped being renamed as it is still a nominal day of rest. After Black Friday comes Small Business Saturday, and after Cyber Monday we now have Giving Tuesday.

Giving Tuesday was an initiative started in 2012 by the UN and a number of tech companies, notably Mashable and eventually the Bill and Melinda Gates Foundation. The intention was to tone things down and bring people’s attention to that more traditional Christmas effort of charity-giving. The effect of this push has been remarkable: in 2018, almost $400 million was raised in the US through Facebook and other sites offering a platform for users to donate - donations which were often subsequently matched by the tech companies. That's no small change for good causes. 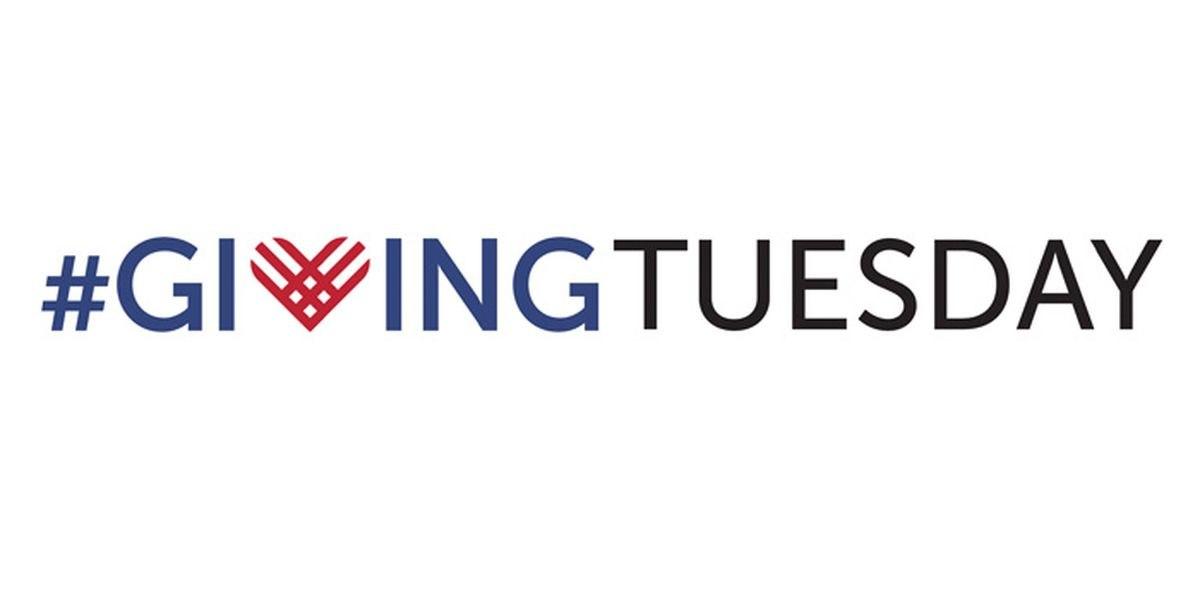 The retailing gold of Black Friday and Cyber Monday has made its way to other parts of the world over the last decade, becoming especially popular in Italy, France, South Africa and Japan. According to a 2019 IPSOS report, global sales were on average 6.6 times higher than a regular Friday, with Pakistan leading the way, at 115 times regular spend. It’s worth noting that Pakistan and some other Islamic countries have considered terming it White Friday or Blessed Friday, to avoid referring to the holy day of Friday as 'black'.

It is easy to see how Black Friday has quickly spread worldwide. As mobile and eCommerce technologies have become more widely adapted, consumers have become more comfortable with using them, as well as more demanding. The American online giants, naturally, led the way - like Amazon, which now operates in 14 local markets. Regional retailers are starting to offer stiff competition to the global movers, one example being the African eCommerce platform Jumia, which is based in 12 countries and headquartered in Nigeria.

The combination of Black Friday and Cyber Monday is however dwarfed by China’s phenomenal Singles’ Day which this year saw over $38 billion in sales in just over 24 hours. Compare this to the $23 billion earned by the top US eCommerce companies over the four days in 2018.

Single’s Day was created by retail giant AliBaba in 2011, (the date 11/11 symbolically marking '1', or an unattached person) and it has grown exponentially to become the biggest shopping day in the world - offline and online.

This year’s shopping extravaganza was kicked off in Shanghai with a performance by global headliner Taylor Swift, her presence an indication of how this Chinese event might start spreading to other countries. There are signs that Black Friday itself is also taking off in China, as it is promoted by AliBaba and JD.com’s platform Koala, and is especially popular with ‘haito’, shoppers who gravitate to foreign goods 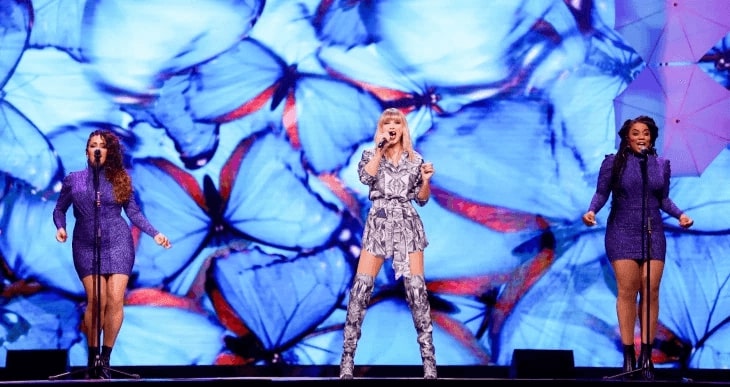 On the flip side of the coin, there are those who react against the consumerism of Black Friday. The annual ‘Buy Nothing Day’ has been running alongside Black Friday since 2001. Started by Canadian Mennonites and promoted by the group Adbusters, it has not picked up as much steam in the social media age as it might have, no doubt due to having to compete with the global growth and promotion of Black Friday and adoption of Cyber Monday.

A greater backlash against the excesses of the shopping frenzy, has, not surprisingly, been more noticeable outside North America. In France, 'Block Friday' protestors tried to block an Amazon warehouse outside Paris. And lawmakers are considering banning Black Friday for causing overconsumption and resource waste with the Environment Minister making a proposal to prohibit the event on the grounds that it helps online global, not local, retailers as well as the environmental impact.

Meanwhile, in the digital space, the Make Friday Green Again collective was started by the French ethical-fashion brand Faguo to encourage more conscious consumption, and 450 clothing brands have signed up to support it in the 2019 season. Customers are invited to drop their unwanted clothing and shoes into any Faugo store, while the brand promotes - not least through their Instagram presence - their own participation in the increasingly-popular tree-planting movement. 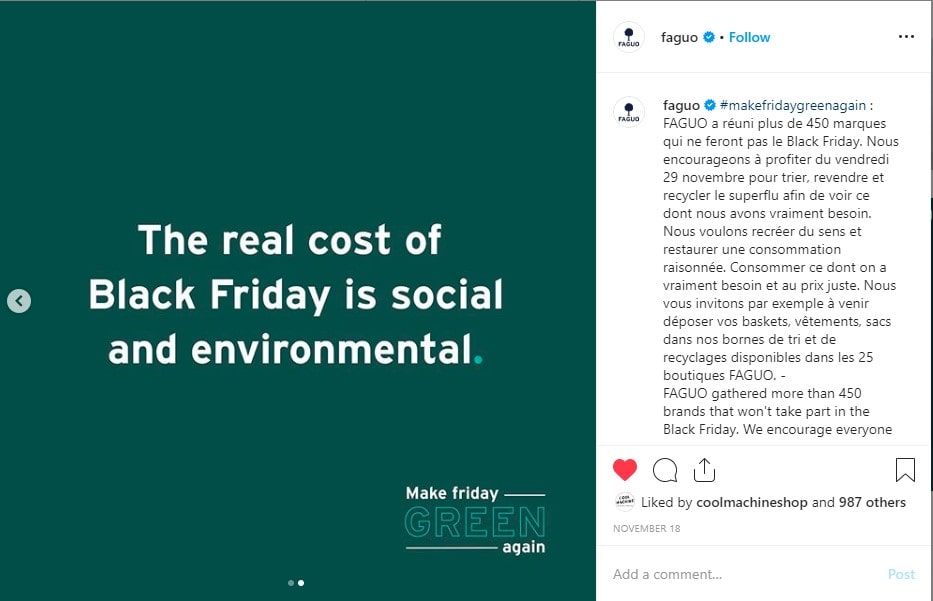 Back in the US, one brand that has already been doing a remarkable job of balancing conscious consumption with promoting their core values, is US outdoor-gear company REI. Their #OptOutside campaign has been running for just a few years but with the excellent PR, user-generated content and social media engagement they have earned, they have clearly followed their principles in a very real way.

Since 2015, REI closes all its retail locations and online operations every Black Friday while still paying its 13,000 employees and encouraging everyone to get outside and hike, walk, camp, whatever takes your fancy. All of these healthy activities are what their products are designed for, and they work year-round towards zero-waste operations, campaign against plastic packaging and contribute to other environmental efforts.

In 2019, they have added a new element: asking their employees and 18 million members to take things further and #OptToAct. With a microsite detailing ways, and locations, to get outside and clean up, doing that little bit more to help the environment, the campaign is sure to garner even more attention online.

It has taken just a decade for Black Friday to become a worldwide phenomen and in-store traffic has probably peaked as online is clearly where the growth lies. Just as the digital landscape constantly evolves, so does that of the biggest shopping period in the calendar.

Retailers and marketers need to keep an eye on some key elements that are becoming evident like:

But it’s not going away anytime soon. In the words of onetime John Lewis MD, Andy Street:

“I don’t think we can put the genie back in the bottle, but do we need to stoke that fire anymore? I personally hope not.”Andy Street (ex John Lewis)