The ‘Back To Basics’ Marketing Success of Oatly 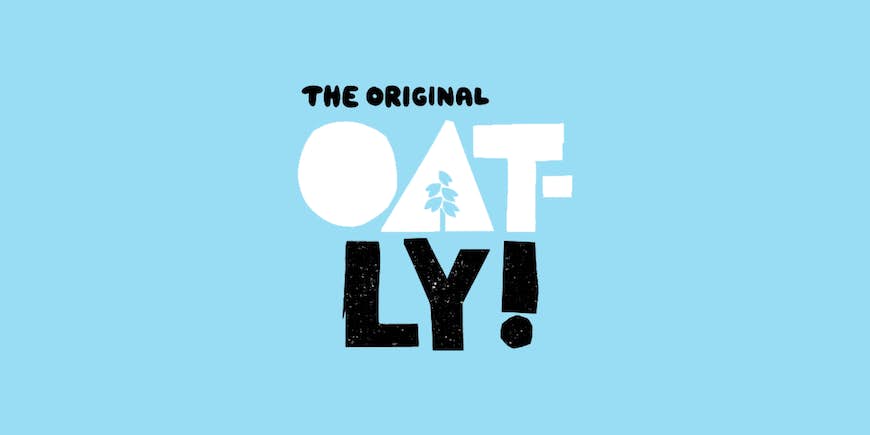 Have you noticed the endless choice of milks you can add to your latte or cappuccino right now?

From soy and almond to hazelnut, rice, and beyond, there has never been such an eclectic mix of ways to experiment with your morning coffee. And, of all the alt-milks on the market right now, oat is arguably the top dog.

Oh, and in case you're not aware, Oatly is one of the world's leading purveyors of plant-based milk.

In fact, Oatly has seen an incredible rate of growth during the pandemic, with an impressive 2020 sales growth of 295% across all of its product categories, globally. And, with the brand’s success set to continue, Oatly is in the midst of launching an IPO by the end of 2021.

Oatly is in its prime right now, but how did the brand’s seemingly overnight success come about—and how does it approach its marketing activities?

We’re going to take a look at Oatly’s colossal success and explore the brand’s forward-thinking ‘back to basics with a twist’ approach to marketing.

Bowl and spoon at the ready—let’s dive in.

Rise of the Plant-Based Milk

With the threat of an environmental crisis looming, people are more eco-conscious with their consumer choices than ever.  A revolution is in motion.

But, believe it or not, plant-based milk is not a brand new concept. In fact, Belgian brand Alpro was founded in the 1980s and is often referred to as the pioneer of alternative milk products—with soy, hazelnut and oat all part of its range. But, a decade after the company’s launch, a new brand began its journey...

Formulated in Sweden by food scientist, Rickard Öste, during the 1990s, Oatly was created to appeal to people who have a lactose intolerance while providing a healthier, more environmentally-sustainable alternative to cow’s milk.

Given that around 68% of the world is estimated to be lactose intolerant and that oat milk offers a solution to a variety of consumer pain points (the environment, allergies, and personal health), Öste’s oat milk product was tipped for great things.

The product’s original incarnation, ‘Mill Milk’ was rolled out in Europe but with minimal success. Following that, an oat-based yoghurt with Danone flopped—something wasn’t hitting the commercial mark.

After going back to the drawing board and reimagining his brand image and marketing strategy—something we’ll talk about in more detail below—Öste launched Oatly, expanding his product range to meet the needs of a growing market. Now, Oatly owns 65% of the Swedish non-dairy category.

Savvy marketing and branding aside, one of the key components of Oatly’s roaring success is down to seizing opportunity when it arises. In this case, it’s the sharp uptake of eco-consciousness and veganism. Oatly made its mark in Sweden, and now is enjoying world domination (of the plant-based variety). Today’s consumers are holding brands more and more accountable for their practices in terms of sustainability

By 2025, the vegan food market is set to be worth a whopping $24.06 billion. And according to Global Market Insights, the plant-based milk market will reach $12 billion in value alone by 2026.

Oatly is right where it needs to be—but since it launched in its current form around 2016, the brand took a bold marketing leap—adopting a level of vision its competitors were unable to achieve.

“You see a graphic that shows up on the news of the categories that are surging in growth. And you're like, OK, hand sanitizer, that makes sense. There was a toilet paper shortage. I've read about that. And then you see oat milk on that list, and you're like, 'What, how is that on there?” Mike Messersmith, President of Oatly, North America

The uptake in oat milk did indeed soar during the COVID-19 pandemic and Oatly reaped the rewards. But, before that happened, the brand did something a little unorthodox by today’s standards.

Rather than investing in droves of Google Ads or going straight in for the social media kill, Oatly decided to expand its commercial reach and raise vital product awareness in the US (a huge target market) by going straight to the front line—the coffee shops.

To ride the crest of the plant-based wave and place its product (and branding) right before a captive coffee-drinking audience, Oatly teamed up with a selection of artisanal coffee shops where patrons were more likely to seek an alternative to dairy in their daily cup of Joe.

Through the baristas on the front line, Oatly positioned itself as the greatest alternative to dairy, searing its name (and its taste) into the minds of satisfied coffee drinkers across the nation. Arguably, the most creative part of the initiative is the fact that Oatly made a Barista Blend that is thicker than its traditional products—making it easier for those advocating for Oatly to make better, more attractive coffees for their customers.

Eventually, coffee shop consumers began to recognize the Oatly name, and the brand expanded its cafe-centric domination, placing its now-famous Barista Blend in these trendy, quirky, independent venues across the nation (coffee shops that align with Oatly’s brand image and ideals).

In 2018, Oatly opened its first factory in New Jersey—and a shortage of its signature oat milk even saw committed converts buying severely marked up cartons of the stuff on eBay.

This is arguably one of the most successful cases of bold, creative marketing in recent history—but Oatly knows how to do digital too.

Following the success of its barista-based initiative, Oatly invested in its online presence with campaigns and messaging that stand out from the crowd.

From the start Oatly has been dedicated to helping the planet with a more than palatable plant-based alternative to dairy milk. And, all of the brand’s campaign messaging reflects its ideals and delivers them to its audience in a way that really resonates.

Oatly’s recent ‘Help Dad’ campaign, for instance, targeted teens, inspiring them to convert their fathers to plant-based milk through a series of humorous yet provocative videos:

Some of the ads earned prime time Saturday night ad slots in the UK and although some saw the campaign as blinkered and ageist, the brand’s uncompromising tone shone through. To supplement the campaign and engage dairy-loving dads (and their kids), Oatly created a dedicated microsite to helping middle-aged men (identified as the demographic least likely to convert to plant-based milk) switch to Oatly with info, tips, and recipe ideas.

Oatly also created a landing page that encourages consumers to sign a petition against the EU’s censorship of plant-based products.

Informative, direct, and dedicated to the cause, ‘stop plant-based censorship’ is another effective digital outlet for the brand’s mission for sustainability.

In addition to its unwavering brand ideals and its ever-expanding range of oat-based products, Oatly stands out from the crowd due to its unmistakable branding and unique tone of voice.

This video jingle from Oatly’s very own CEO, Toni Petersson, is a prime example of the brand’s playful yet direct brand messaging.

Akin to British drinks company Innocent, you can spot Oatly’s brand voice a mile off—making it instantly recognizable and as digestible as the products themselves.

Oatly knows its audience inside-out and as such creates messaging that strikes a personal chord with its audience across just about every touchpoint imaginable.

Staying true to its original marketing focus, the brand also has an Instagram channel dedicated to baristas where it shines a light on this 21st-century artform while providing a branded space for coffee professionals to connect, share insights or simply enjoy browsing.

The brand’s messaging takes on a life of its own—and it has the creative assets to back it up—initiatives like its closest Oatly-serving cafes map, called Oatfinder.

Oatly’s brand tone is fun and accessible—but when it comes to sustainability, its messaging pulls no punches. It’s this idyllic balance and clearcut commitment to its original mission that contributes to Oatly’s ongoing global plant-based milk domination.

An ever-expanding product range and a continual rise in popularity mean that Oatly is likely to enjoy riding the crest of the plant-based wave for some time to come.

To expand its commercial reach while maintaining its commitment towards a more sustainable planet, Oatly is currently working with two non-profit organizations to encourage farmers to start growing food-grade oats as part of their regular crop rotations. And, with initiatives like this, irresistible digital content is likely to follow.

There is a small wave of consumers that has been boycotting Oatly due to a recent deal it made with Blackstone—an alleged donor of the Trump administration and a firm accused of contributing to  Amazon deforestation.

While some former brand advocates have accused Oatly of getting into bed with the enemy and selling its soul, the brand came back with, as you might imagine, a well-executed statement:

"We thought that if we could convince [Blackstone] that it’s as profitable (and in the long-term even more profitable) to invest in a sustainability company like Oatly, then all the other private equity firms of the world would look, listen and start to steer their collective worth of 4 trillion US dollars into green investments."

Despite the recent controversy, the fact remains that Oatly is currently at the top of its game—and the best may be yet to come. If nothing else, this story goes to show the power of persistence and the value of going against the grain in a competitive digital world.

Articles:
The ‘Back To Basics’ Marketing Success of Oatly

Articles:
The ‘Back To Basics’ Marketing Success of Oatly